Steps That Schools Take Against Bullying 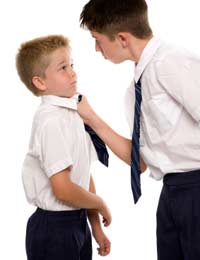 Bullying is a very serious concern for any parent especially when their child starts at a new school. It can be a daunting time for both parents and children alike and it is important to know and understand how the school deals with issues of bullying if and when they arise.

Before establishing what schools can do to reduce bullying, it is worth considering what constitutes bullying to begin with. Bullying does not necessarily have to involve inflicting any kind of physical abuse on another pupil, although that does unfortunately happen. Bullying can also be undertaken as:

What Do Schools Do If They Discover Bullying

If a teacher is informed of an case of bullying within the confines of the school they must act on it immediately in order to prevent it happening again. However, it is sometimes very difficult to have the child that is being bullied admit to being bullied for fear of further reprisals.

If the bullying is another instance in a long line of complaints, the Head Teacher must consult with the Local Education Authority with reference to the long-term School Exclusion.

Parents can appeal against any such decision but during the time leading up to the appeal the pupil responsible for the bullying may not attend classes in the usual manner – this is another means of enforcing the punishment.

Helping To Combat Bullying in Schools

A number of schools in the UK do not allow the use of mobile telephones during school time in order to cut down on the amount of so-called ‘Cyber-Bullying’ – a trend which has worryingly emerged since the advent and mass production of cheap mobile telephones.

Schools also monitor the Internet access of all children in their Information Technology classes so that bullying via email and message boards can be minimised. Any child found to be using such methods of bullying are liable for instant suspension until the matter is resolved.

Local Authorities provide training for teachers and teaching staff in how to deal with potential volatile situations which may arise as a result of bullying. This training is regularly updated and kept in line with government standards and requirements.

If you would like to know more about your child’s school policy on bullying, it is worth arranging an interview with the Head Teacher or alternatively the School Welfare Officer. Your Local Education Authority will also be able to provide you with information and literature on how to help teachers combat bullying in and out of school.

Regulations On The Home Schooling Of Your Child