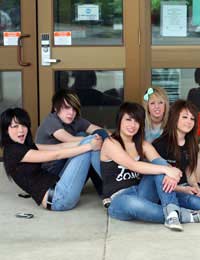 In certain circumstances, especially those relating to anti-social behaviour, your local council, in conjunction with the police, may issue Curfew Notices. As the name might suggest, a Curfew Notice (known in some areas as a Dispersal Order) is designed to enforce a curfew in a particular area; most likely an area where offences against property and people are carried out in the evening and late night. Under a Curfew Notice, anyone at or below a designated age may be stopped and questioned by the police without necessary cause.

The purpose of the Curfew Notice Scheme is to alleviate the number of offenders who may be loitering in a particular area and be likely to cause either public order or Anti-Social Behaviour Offences. These offences include:

How Curfew Notices are Enforced

A Curfew Notice can be enforced by any officer within an area where a Curfew Notice has been obtained. They may reasonably execute this Curfew Notice if they feel that the individual in their custody has been – or is likely to be – involved in the committing of an offence which contravenes the nature of the Curfew Notice as laid down by the police, the council and the Secretary of State.

A suspected offender may be detained if the officer who has stopped them believes there is reasonable doubt in the legitimacy of the information they have provided, such as name, address, date of birth, and the reason for being at the location. If the offender refuses to comply with requests for information, they may be detained and taken to their nearest police station.

If, however, they provide information which is confirmed by the officer who has detained them, they may reasonably expect to be escorted to their home address, at which time the officer will speak to the offender’s parents – or Guardian – and issue a caution as to the nature of further breaches of the Curfew Notice.

Curfew Notices are also used as a means to combat truancy in areas where there are high truancy levels and problems caused by those playing truant. If an officer suspects that a child or group of children are playing truant from school, he or she may reasonably be expected to remove them to a designated location, such as the office of a school welfare officer, where every attempt will be made to contact the parents or guardians of those involved.

The repeated contravening of these Curfew Notices, in particular by the same individuals, may result in the local authority issuing notices of eviction in accordance with the conditions set forth by the Secretary of State.

If you require more information on Curfew Notices and whether there are any in force in your community, contact your local council offices or community police officer.